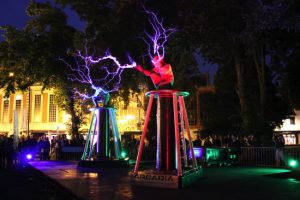 Entertainment at corporate events often surpasses the entertainment we are used to at weddings, birthdays or anniversaries. Large budgets and a series of brand objectives mean that companies aren’t afraid to pull out the stops to create an unforgettable and emotionally resonant experience. We take a look at four of the flashiest and tech-savvy corporate entertainment at events.

1) After show party on Swan Lake at the London Coliseum

Yota was the sponsor of the Mikhailovsky Ballet’s production of Swan Lake, which graced the stage of the London Coliseum. In line with the company’s tech-savvy reputation, the Russian smartphone and mobile broadband service provider put on an after-show party of magnificent proportion and beauty. As well as the opulent dinner and champagne, Musion’s hologram technology, Laura Jean Healey’s photography skills and 3D animation from SquareZero came together to create a hologram of the prima ballerina dancing, turning into a swan and then bursting into a cloud of glittering butterflies. You can view the video on Vimeo here. Entertainment for corporate events needs to be suitably aligned with how a brand wants to be perceived: Yota did this very successfully at this event.

Virgin Atlantic celebrated ten years of operating in Australia as Virgin Blue on a grand scale. Virgin’s quirky CEO Sir Richard Branson was out in full force in Melbourne for the extravagant event. Staffed by over 100 people, the corporate entertainment kicked off with a flamboyant tap dance display from the legendary Tap Dogs dance troupe on the wings of a Boeing 747 (you can watch a video clip of the display here). Balanced on the plane’s wing was a grand piano, on which Delta Goodrem gave a surprise performance. Entertainment for corporate events doesn’t get more high-flying than that.

3) The Martini Royale in London

In 2012, alcoholic beverage producer Martini put on the Martini Royale casting event at London’s Design Museum, viewable on Vimeo. Thousands visited the Thames-side museum for a casting to find the woman who would become the face of Martini in their 2013 advertising campaign to celebrate the brand’s 150 year anniversary and embody their ethos of “luck is an attitude”. Aside from the crowds of women who attended the event to audition– of which Charlize Theron, Monica Belucci and Thandie Newton have also counted themselves – there was an impressive exhibition by shoe designer Christian Louboutin, dancing girls and a very well-stocked Martini bar: corporate entertainment at its most lavish.

A 15m x 4.5m LED screen adorned the banquet hall at Gauteng’s stunning Helderfontein Estate for Nedbank’s 2014 Marketing Summit – an event attended by 250 marketing staff, management and affiliate agencies – including TS&A Events, who also staged the event, Native VML Digital Agency, Joe Public and Saatchi & Saatchi. The aim of the summit was to showcase and share all of the bank’s marketing and brand campaigns and work from the previous year.

The event’s specialised LED screen ran on Coolux software that displayed everything from PowerPoint presentations to videos, live tweeting and 3D graphics. Multiple types of media were displayed at once, giving guests an immersive visual experience and aligning the brand to improve its consistency and messaging for the coming year. In addition to the impressive audio visual technology, attendees enjoyed extravagant live dance and music performances. A sumptuous dinner and an impressive cocktail bar topped the event off. Who said banking was boring?

To get corporate entertainment at events right, you need to have detailed knowledge of your guests. You should know what delights and impresses them, as well as what to avoid. Download the Practical Guide to RSVP to find out how RSVP automation will help you create memorable events. 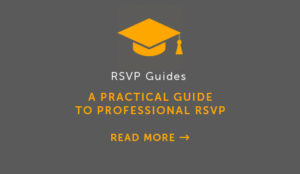