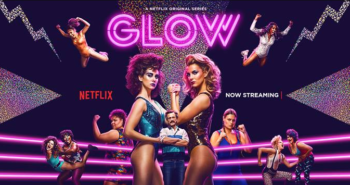 If you haven’t had a chance to watch Netflix’s newest series, GLOW, we suggest you have a gander and then get back to this blog. Set in Los Angeles in the 1980’s, GLOW, which stands for “Gorgeous Ladies Of Wrestling” is a laugh-out-loud comedy drama that follows a cast of misfits as they transform from ordinary women into over-the-top wrestling superstars. With Alison Brie as the comedy’s protagonist, and Marc Maron as the tough talking oddball director, the series explores the inner lives of women who against all odds, break into the spotlight by embracing their inner strength.

While it’s safe to say that you probably don’t conduct your day in a day-glo leotard and cape, we think you’ll identify with the following story arcs and themes that the series so cleverly portrays.

Pulling off moves like the suplex and the chokeslam was not something that came naturally to the characters, but the more they practised – often with hilarious results – the easier it became. After a few rounds in the ring, their moves echoed the real thing.

Just like the ladies of GLOW, event professionals – at some point in their career – have to fake it until they make it. Whether it’s keeping a calm facade in the midst of a chaotic set-up, or assuring a client that the keynote speaker will arrive on time, event professionals know that the only way to succeed often entails feigning confidence, even when you’re faced with a stressful situation that’s completely out of your comfort zone.

Lead actress Brie, who plays Ruth, is first without a wrestling alter-ego. Left to her own devices, she improvises and comes up with a Russian speaking persona who successfully takes on the all-American star of the show, Debbie.

Much like the improvised wrestling we see on the show, the nature of the event industry requires a lot of quick-thinking. If something goes awry, event professionals have to think on their feet and come up with a solution to a problem

Show up –  no matter what

The ladies of GLOW aren’t used to hours spent training in the ring, nor are they accustomed to running a 5k at the crack of dawn. After a night out downing tequila, the last thing they feel like is hitting the gym, but they do. And the payoff is well worth the pain.

Event professional have to deal with a lot. Late nights, long days on the road and meetings that seem to take an age make getting out of bed that much harder. But despite a gruelling schedule and very little sleep, event professionals show up, no matter how tired or busy they are.

Sure, the budget may be on the slim side, but the women of GLOW aren’t anything but creative when it comes to crafting their costumes. From using nail polish as a teeth stain (not recommended), or raiding the closet of their fashion-loving, trust fund baby of a producer, the ladies turn to ingenuity and come up with creative solutions to outfitting themselves on a shoe-string budget.

Thriving in the event industry requires a unique blend of creativity and strategy. Whether you’re finding a replacement for a caterer at the last minute, or tasked with shuttling VIPs to a safari-themed gala dinner under the stars, finding creative solutions to sticky situations is all in a day’s work for an event professional.

Did GLOW resonate with you as an event professional? We’d love to know!